The architecture of a parliamentary building usually reflects the culture and traditions of governance of a nation. In the summer of 2006, a new façade for the Mongolian State Parliament building was unveiled commemorating the 800th anniversary of the Great Mongol State. A seated statue of Chinggis Khaan occupies the center of the complex under a rectangular glass cupola supported by four white marble columns with gold capitals. Six more columns on both sides of the baldachin supporting windows in lieu of entablatures complete the central structure. Each side of the central unit are connected to fourteen more columns forming colonnades closed off by glass walls. Both colonnades lead to square loggias with smaller cupolas supported by ten columns each. They house seated statues of his third son Ugudei Khaan on the west side and grandson Khubilai Khaan, founder of Yuan dynasty, on the east side. A large open stairway in front of the central structure leads up to the monument of Chinggis Khaan. The inscription on his pedestal carved in classical Mongolian script reads, “The founder of the Great Mongol State heavenly ruler Chinggis Khaan”. Two warriors on horseback stand on both sides of the stairway. The architecture of this building with its new addition contains a wealth of symbolism that tell the story of how modern Mongolia came to be and gives an insight into the values that shape our culture. 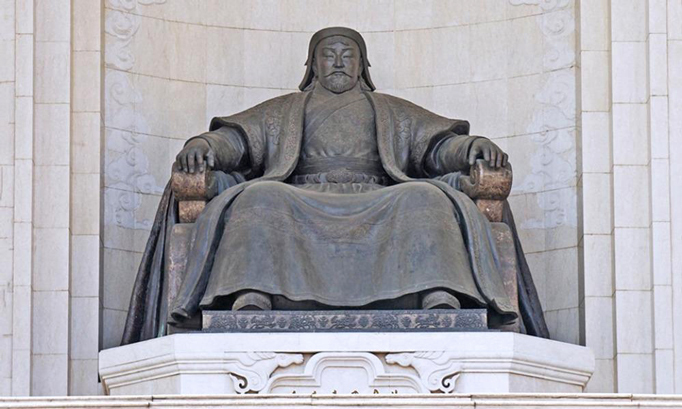 Friendship between two strangers begun in 1178 near Mount Burkhan Khaldun is the first key to unlocking this symbolism. When Temujin was sixteen years old, thieves stole his eight palomino (sharga) horses. At sunset, Temujin’s brother returned from hunting and Temujin took off on his brother’s short-tailed red dun (ogotor khongor) horse following the trail of bent grass-blades left behind by the horses’ hooves. After three days and nights, he came across a boy milking a mare and asked him if he had seen eight palomino horses pass by. The boy affirmed that he knew the direction in which they went. He introduced himself as Nakhu Bayan’s only son, Borchi. He offered to accompany Temujin, for he saw that the thieves were many and dangerous to confront alone. Temujin agreed, and Borchi gave him one of his fast horses to replace Temujin’s exhausted horse. After three more days and nights, they found the eight horses and quickly started to herd them back home. As the thieves chased after them, Borchi told Temujin to run away with the horses while he held back the thieves with his arrows. But Temujin refused and the two of them fought alongside each other until the thieves were left far behind and they could both safely escape. Upon return to Borchi’s home, Temujin offered Borchi as many horses as he wished in appreciation. But the latter refused, saying that he only wished to help a man facing grave danger. Since childhood, Temujin’s encounter with strangers had only brought him tremendous suffering. But in this instance, for the first time in his life, a stranger had presented him with the gift of unconditional kindness. Over dinner, Nakhu Bayan, Borchi’s father, after a great deal of scolding and crying for fear of his missing son concluded that the ordeal’s successful end marked the beginning of a solid friendship. Thus, Temujin became friends with Borchi whom he valued for the rest of his life. Borchi fought alongside his friend in over thirty battles during his lifetime. Honest, brave and generous, Borchi proved to be a formidable commander. Temujin never ceased to listen to his friend’s wise counsel even when their success in wars ultimately led Temujin to earn the title of Chinggis Khaan. Such is the story of one of the warriors portrayed on a statue to the right of Chinggis Khaan in front of the Parliament building. As Commander of the western armed forces of Chinggis Khaan, he is depicted wearing a traditional Mongolian warrior’s leather armor that was before the Mongol army adopted advanced protective gear from cultures beyond the Mongol State. 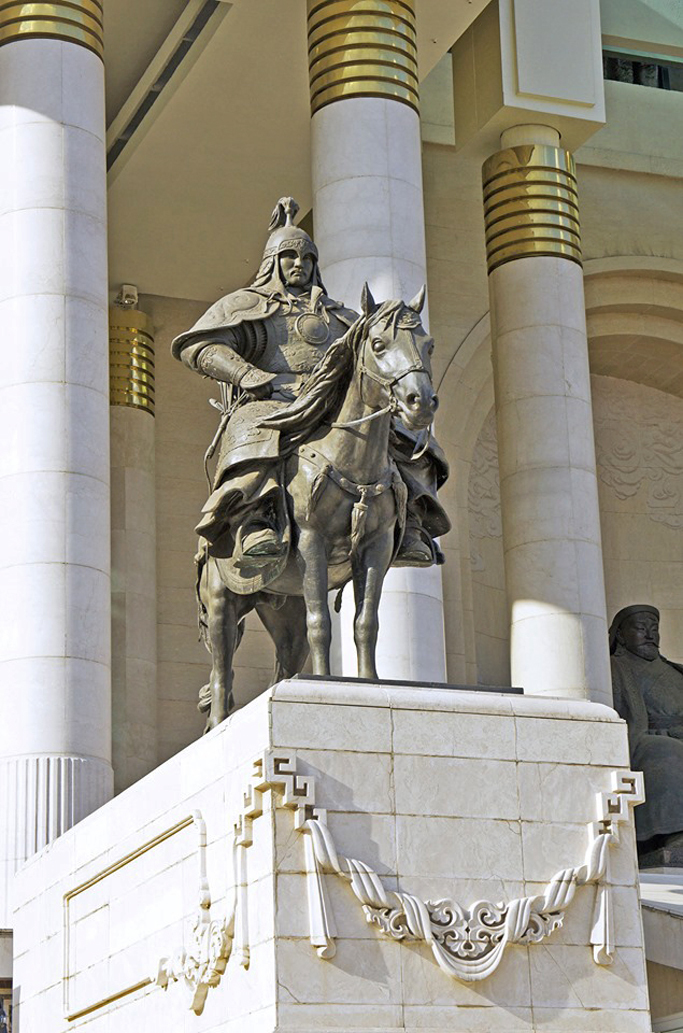 Loyalty was one of the highest principles that Chinggis Khaan’s leadership entailed and one of the strict standards by which he held himself, as well as his warriors, accountable. In 1199, Toril Khaan of the Khereid State was fighting alongside Chinggis Khaan’s army against Buirug Khaan of the Naiman State. After an enemy of Chinggis Khaan persuaded Toril Khaan to abandon his ally in the middle of the night, Chinggis  Khaan’s army awakened the next day to an empty camp with no ally in sight. However, Buirug Khaan still decimated Toril Khaan’s army on his way back and Toril Khaan, on the verge of extermination, sent an emissary to Chinggis Khaan pleading for help from his four warriors. Chinggis Khaan did not forget the help of allies easily. Toril Khaan was his father’s ally and once had helped Chinggis Khaan rescue his beloved wife Borte from the enemies. So Chinggis Khaan sent him his four best warriors, Borchi, Mukhulai, Borokhul and Chuluun, who crushed Buirug Khaan’s forces and returned Toril Khaan’s captured people and animals back to him. However, Toril Khaan’s loyalty proved to be feeble and the Khereid State withered away as their Khaan and heirs eventually perished at enemy hands. As a man of his word, Chinggis Khaan excelled at forging alliances. He was highly perceptive about people, especially the strength of their loyalty, and greatly valued those who were as loyal and perceptive as he was toward his allies. Many soldiers of diverse backgrounds and origins were promoted to the highest ranks of Chinggis Khaan’s army after proving their unshakeable, incorruptible and undying loyalty in battle. One such soldier was Mukhulai. In various sources, as referred to by I. Chinbat in Chinggis Khaany Yusun Urlug (2019), Mukhulai is described as over 2 meters tall, “strong as an elephant”, sharp-sighted, deft, strategic and fearless. Legend remains that once Chinggis Khaan and his thirty men including Mukhulai were attacked by an enemy near a ravine called Zev. As the arrows came down on them like rain, Mukhulai shielded Chinggis Khaan and called the others to fight as he started to shoot back. The enemy’s men fell one after the other from every single arrow that the warrior released. When the astounded enemy asked who the archer was and heard that it was Mukhulai, they were said to have fled and never returned.

Mukhulai was the third son of Gung gua of Jalair country of the Naiman State. Gung gua had expressed to Chinggis Khaan his wish to introduce his son as a friend in a ceremonial oath under the sacred Saglagar tree of the Khorkhunag valley. Once Gung gua accompanied Chinggis Khaan and his seven horsemen when they were attacked. Chinggis Khaan’s horse had died from a wound, and Gung Gua gave him his, as he elected to stay and hold back the enemy so the rest could escape. Gung gua died and saved Chinggis Khaan’s life. Many years later, Chinggis Khaan held the ceremony for his friend Mukhulai under the Saglagar tree as Gung gua had wished. But by that time, Mukhulai had already proven his loyalty to Chinggis Khaan many times. The Mongol State had been established and was now fighting the better equipped and superior armies of the Liao and Jin dynasties. As commander of the eastern armed forces of Chinggis Khaan, Mukhulai played an indispensable role in the long wars on the southern front for over 25 years, eventually leading to the siege of Beijing. Mukhulai treated his men like his own brothers and taught them how a few soldiers employing astute tactics could outmaneuver a stronger, larger army. He was also a shrewd diplomat who advised Chinggis Khaan to actively employ emissaries and forge strategic alliances including with the Song dynasty which resulted in the growth of Mongol forces and the advancement of military technologies. He died of old age and became an example of military excellence for the rest of the soldiers of the Great Mongol State. This was the man whose statue stands on the stairway of the Parliament building to Chinggis Khaan’s front left. He is depicted wearing a metal armor and is holding a mace in his right hand. 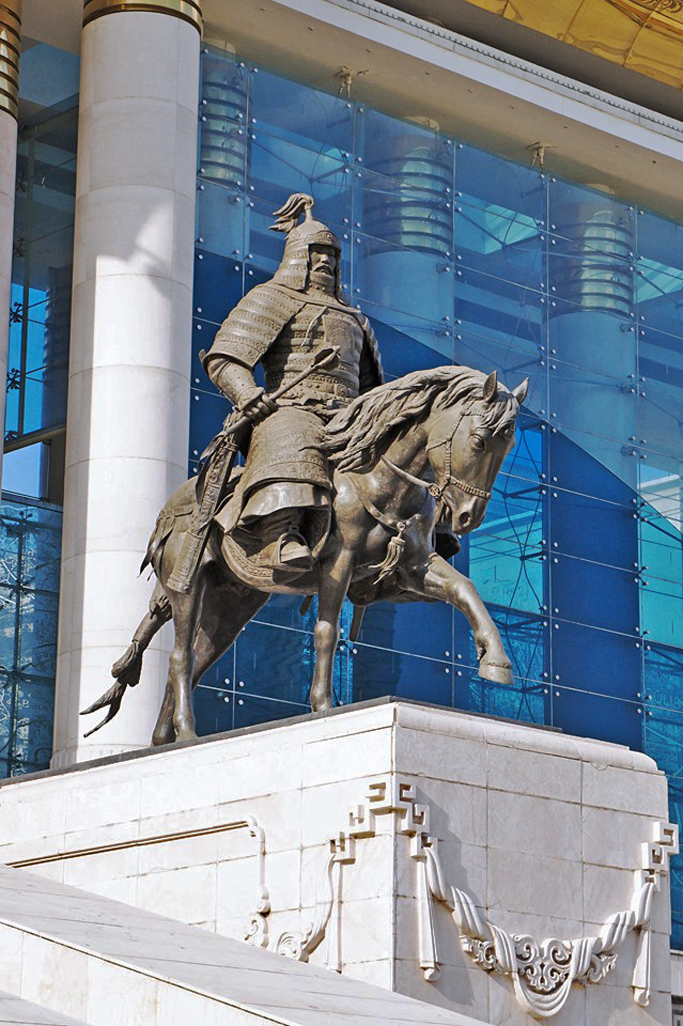 Statues of historical figures serve to honor their contribution to a nation’s prosperity and are important reminders of the values they represent for future generations. In viewing statues, we are piqued to know more about their subjects’ lives and achievements. With the understanding of who they were, we realize their significance in our history, and in our minds, their stories transform the motionless, cold figures into living people. I would have preferred the façade to have been modeled after the classical greco-roman principles of alignment as many beloved architectural gems of Ulaanbaatar such as the buildings of the National Public Library, the Ministry of Foreign Affairs or the State Opera and Ballet Theatre soundly embody. But personal preferences aside, the present solution taken after the traditional Asian temple framing with thinner columns and protruding roof is also viable, albeit more distant.

In 1253, Guillaume de Rubrouck had noted that in Kharakhorum, the ancient capital of the Mongol Empire, a golden angel on top of a grand fountain stood in the center of the royal courtyard surrounded by distinctly Asian temple-like quarters. Therefore, the current design is a reflection of the architectural eclecticism long appreciated by Mongols as in the ancient so in the modern times. Considering that Chinggis Khaan was well known for tolerance of diversity of religions and cultures, the addition of this design to the other structures and monuments on Sukhbaatar Square is a welcomed reminder of his open mindedness. However, as of 2020, public access to this interesting and unique structure is forbidden. So I sincerely wish that our parliament would someday allow citizens as well as visitors to be able to view these monuments from up close as other democratic countries do. Then, the statues and their human stories would cease to intimidate and start to truly inspire modern Mongols and their friends.

In an empire of nomads, very few permanent structures were ever erected, and the impermanence of cities and monuments was of little significance to these warriors of the steppe. You will experience the unique setting of Kharkhorin, located on one of the major trading routes of the ancient Silk Road, and visit nearby places that will give you further insight into the natural and human history of Mongolia.