Rare animals in the Gobi Desert

Rare animals in the Gobi Desert

The Gobi’s fauna is diverse and endemic, with various large mammals that are adapted particularly well to the extreme natural conditions. Ibexes, wild sheep, marmots, and birds of prey such as golden eagles and bearded vultures reside in the mountains, whereas its steppes are home to white gazelles, black-tailed antelopes, and corsac foxes. There are also extremely rare wild animals such as Wild Bactrian camel, Mongolian wild ass, snow leopard and the Gobi bear. 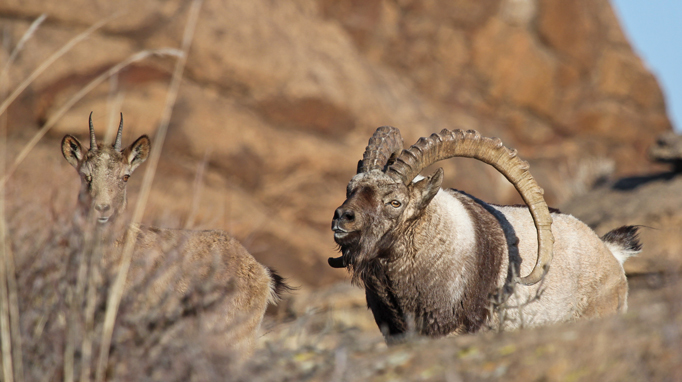 The Wild Bactrian camel or Camelus ferus, separated from any other form of camel over 700,000 years ago, is the only true wild camel species in the world, recognized by the International Union for the Conservation of Nature (IUCN), which controls the Red Book of Endangered Species. Out of 900–1,000 individuals left in the wild, approximately 600 live in the Mongolian Gobi and the IUCN lists it as critically endangered. Its humps are smaller, lower, and more conical in shape than those of the domestic Bactrian camel. Unlike its domestic counterpart, its wool is shorter and always sandy colored. They can survive on water saltier than seawater, an ability that no other mammal in the world, including the domestic Bactrian camel, possess. 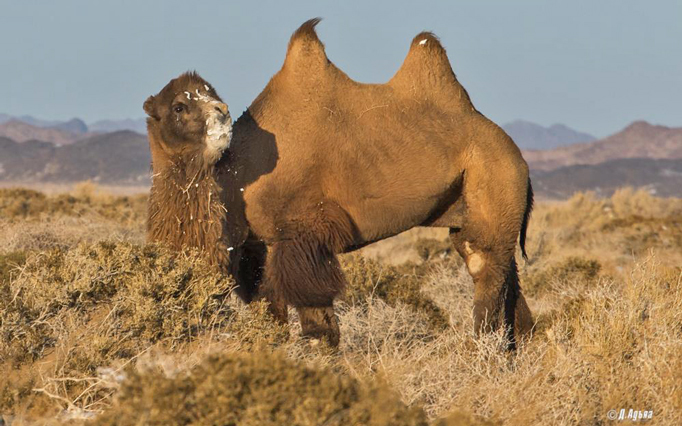 The Mongolian wild ass is believed to be a subspecies of the onager, that can only be seen in the Gobi Desert. It was previously found in eastern Kazakhstan and southern Siberia before being extinct there through hunting. The animal is an herbivore that can live on the thin grasses, shrubs, and trees found in the barren environment of the Gobi. The herds move in a nomadic pattern, pursuing unpredictable resources in their desert environment. They can travel thousands of kilometers in just a few weeks in search of food and water, and their annual range can cover up to 70,000 square km. The Mongolian wild ass is known to dig holes at dry riverbeds and water sources to access to subsurface water during hot summers in the Gobi Desert. Watering holes dug by them are also used by other species as well as by humans to access to water. They were recorded as a near-threatened species by the IUCN in 2015, about 23,000 mature individuals are estimated to live in the Mongolian Gobi and 5,000 individuals in Northern China. 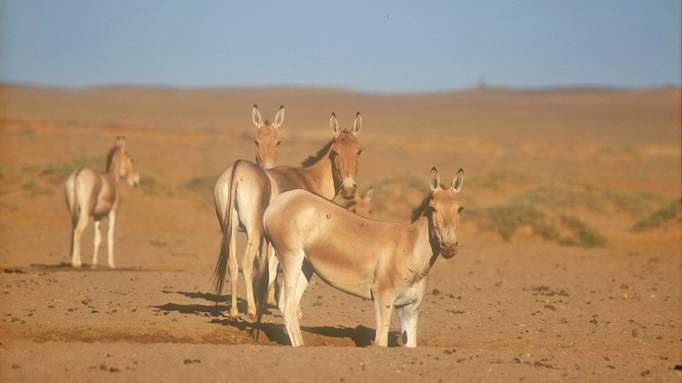 The Gobi Bear, with a population around 30 – 40 adults in the wild, is a subspecies of the brown bear that can be found only in the Mongolian part of the Gobi Desert. Listed as critically endangered, the Gobi bears are omnivorous, eating roots, berries, plants, and rodents. There is no record of them preying on large mammals. Adult Gobi bears weigh around 100 to 130 kg and females weigh around 50 to 80 kg, making them considerably smaller than pandas. There are both international and local organizations working to save these animals from extinction by studying their behavior and improving the environment.

The snow leopard, a big cat distinguished by its thick platinum fur marked by dark spots, is listed as vulnerable on the IUCN Red List, with a global population of less than 8,000 individuals. Out of 1000 snow leopards that are present in Mongolia, the half inhabit in mountains of the Gobi Desert. They are the top predators in the region, mostly hunting ibexes. It has long and powerful back legs which enable it to jump as far as 15 m. 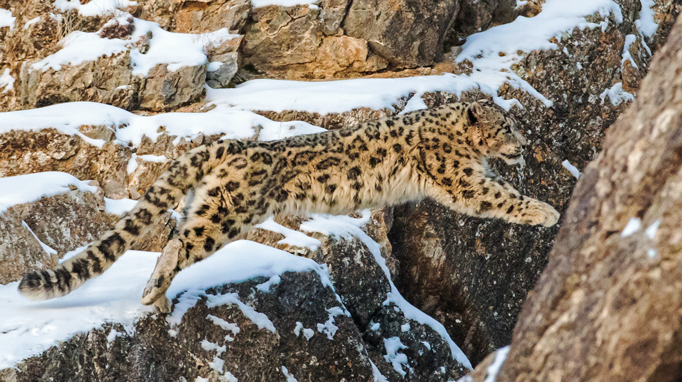 Since the Gobi Desert became a world sensation in the 1920s when a paleontological expedition held by the American Museum of Natural History discovered the first confirmed dinosaur eggs in the world it has been attracting scientists and travelers from all over the world.

The Gobi is one of the world's least densely populated regions, with nomadic families living far apart, much due to the lack of water resources and good grazing areas. Many of these nomads has been herding Bactrian camels traditionally, and large herds can still be seen today, gently walking along the vast plains. We welcome you to choose one of our Gobi Desert tours for once in a lifetime experience.