Being Mongolia’s only region located in a different time zone, it is often being referred to as an annex to ‘mainland’, and indeed, the region is populated by a variety of ethnic minorities in contrast to the rest of the country mainly inhabited by the Khalkh people. Amidst these minorities, the largest, and probably best known, are the Kazakh people.

The Muslim Kazakhs still practicing the tradition of hunting with Golden Eagle. The annual Golden Eagle Festival has turned into quite an attraction for over-seas visitors, and joining these hunters in the midst of winter on their hunting expeditions poses a hard-core adventure, but a very rewarding one.

Our Western Mongolia tours can be divided into two parts, the south and the north. The southern part of Western Mongolia on the slopes of the Altai region offers unique opportunity for wildlife watching, with even a chance of sighting the extremely rare Snow Leopard, while the northern region of western Mongolia dominated by Uvs Province, home to Mongolia’s largest lake, and where the Kharkhira Mountain range is towering.

The Kharkhira range offers one of Mongolia’s most challenging, yet most rewarding trekking trips, starting on the arid plains, taking to the ever-snowed peaks of Turgen-Kharkhira peaks, and on the breathtaking Blue Lake.

In Zavkhan Province one can visit Otgon Tenger National Park to hike or ride horses at the foot of one of Mongolia’s most sacred peaks. The province also features the formidable Ider and Tes Rivers, and the beautiful Black Lake locked deep in some of the world’s most northern sand dunes.

We welcome you to choose one of our Western Mongolia tours for once in a lifetime experience.

Join a unique Golden Eagles and Wildlife adventure in Western Mongolia, well off the beaten track. Spend the... 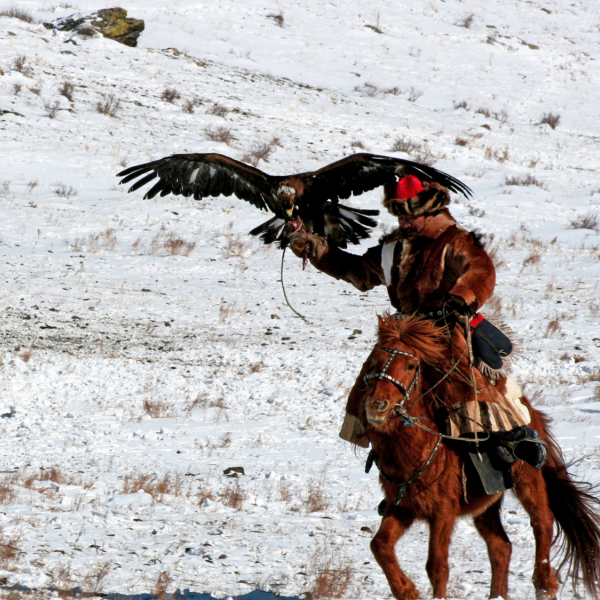