In March 2018 my husband John and myself plus a female friend (also a keen photographer) travelled to Ulaanbaatar to be met at Chinggis Khan Airport in the early morning by a friendly and efficient representative of Mongolian Ways, and taken to the comfortable Chinggis Kahn (aka Ghenghis Khan) Hotel. You will come across his name frequently as he is (understandably still) very much Mongolia’s hero – and his enormous statue presides over the main square.  The capital is a bustling centre, with many good coffee and arts and crafts shops.  We were taken by Tsoggy, our excellent and invaluable guide from Mongolian Ways, to a couple of excellent restaurants during our stay and enjoyed exploring the city and its museums. 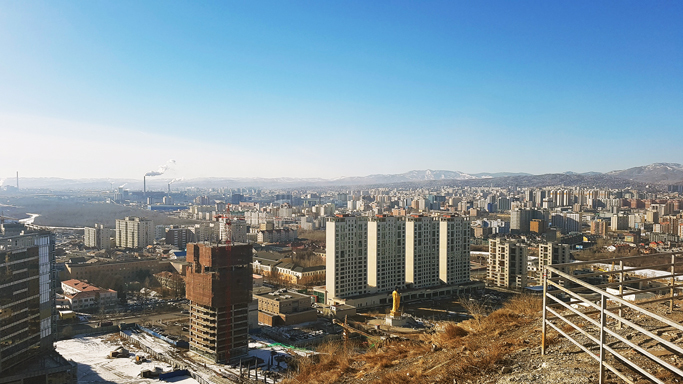 View from The Zaisan Hill

We also had a 2-day excursion to Khustai National Park where I was thrilled to see the wild herd of  Przewalski horses (having owned my own horse for 30 years) and where Mongolian Ways had laid on a event with the local horseman, where they lassoed horses from a semi-feral herd of Mongolian horses with a specially adapted loop on a very long pole called an uurga – a practice unchanged over centuries.  We also visited a kennels where the beautiful Bankhar breed of shepherd dogs (probably the first breed to be domesticated) are being carefully regenerated. 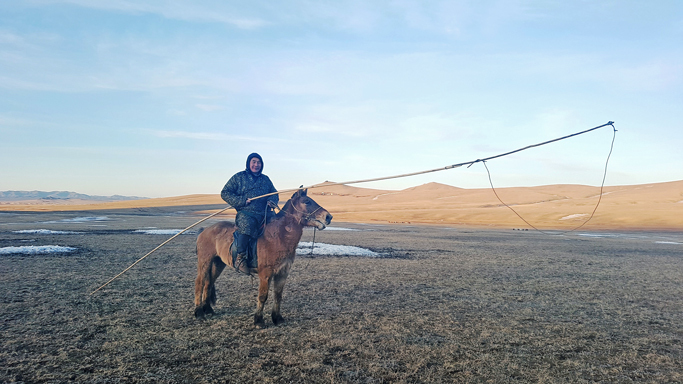 Having flown west to Ulaangom, we then traveled 200 miles overland in a Russian 4 x4 van on dirt tracks driven by expert Mongolian Ways drivers to Ulgii in the far west, which was an adventure in itself and an exceptional way to see the countryside and mountains of this barren but very beautiful land, which turns emerald in the summer months. 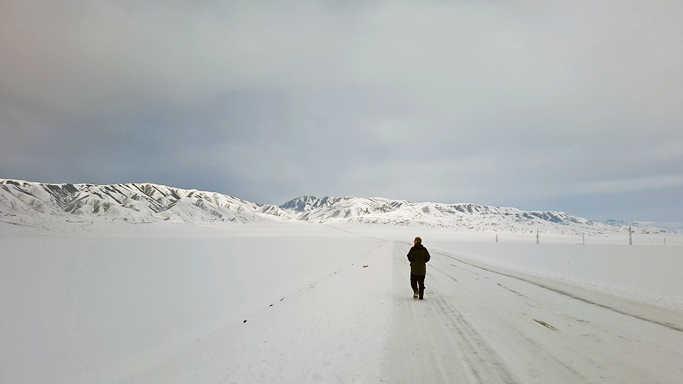 On the way out of Ulaangom to Ulgii

It has to be said we were lucky with the weather as although we had been expecting temperatures as low as minus 40 degrees at night, we experienced only minus 20 initially, and then the sun shone, and it hovered between minus and plus 10 degrees during the days with little wind. It was a very exciting trip – well organised by Mongolian Ways, and providing new adventures most days. The nomads and eagle hunters in whose gers and houses we stayed in the far west of the country were generously hospitable, sharing both their homes, culture and food with us. We were allowed to watch and photograph nomadic shepherds tagging their newborn sheep and goats, and we were always welcomed with Tsai (tea), before having noodles freshly prepared for us. Although nomadic Mongolians eat mainly meat, we traveled with our own excellent and lovely cook when we stayed with families, and she spent a large part of the day chopping up the vegetables we had brought with us. We did not go short of food! 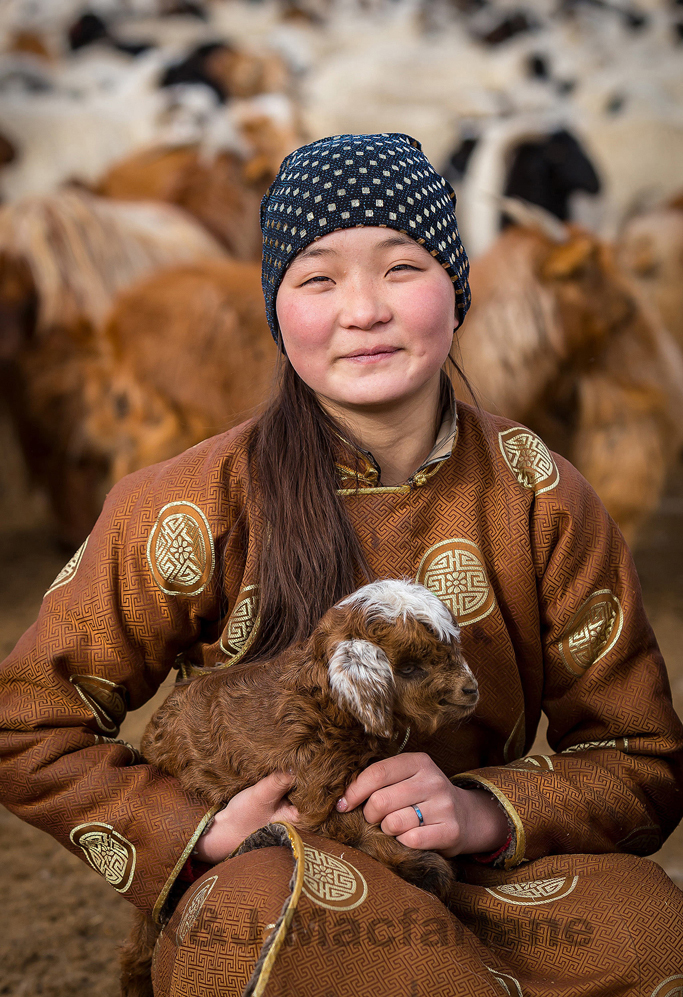 Girl with a newborn goat (Photo by: Rosamund Macfarlane)

Life for nomads is becoming more difficult because of a succession of severe winters (zuds) when many animals have died and many people have migrated to the outskirts of Ulaanbaatar, where each ger burns coal, resulting in pollution (60% of the population lives in Ulaanbaatar). The gers we visited, although in remote locations, often had solar power, some mobile phone reception and tiny televisions, which largely kept the young children amused. 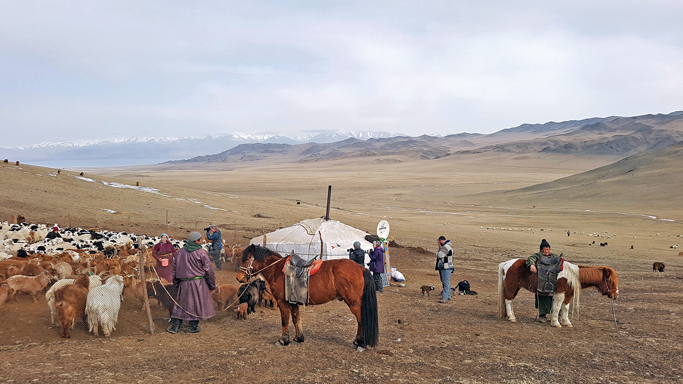 One of the nomadic families we visited

From the largely Kazakh enclave of Ulgii we went out and spent some days as guests of eagle hunting families. Khairatkhan was a very experienced hunter and had an affectionate relationship with his eagle.  Eagles are not given names, but are only known by the number of years they are. After about 7 years the owner, with much sadness, releases his eagle into the wild, to sustain the gene pool and repay it for the years in servitude, before training up another young eagle. Khairatkhan had won many eagle festivals and we rode into the mountains with him on a genuine hunt. 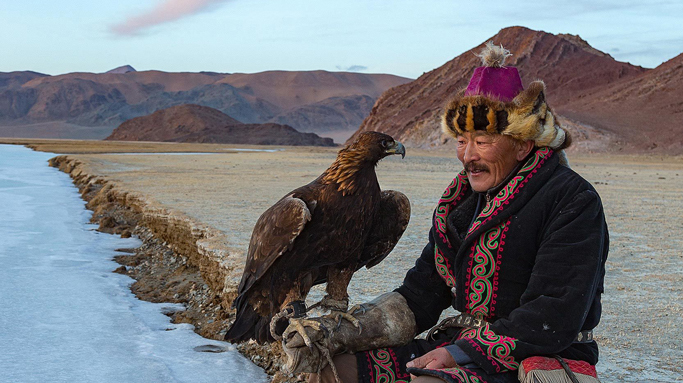 Khairatkhan with his eagle (Photo by: Rosamund Macfarlane)

We were all competent photographers, but were extremely grateful to have with us Asher Svidensky, who is an extremely competent young man, as well as being an inspiring photographer, and he acted as our go-between.  It was his photographs of Aisholpan, the young 13-year-old girl who decided she wished to buck the gender trend and become a female eagle hunter, that were the inspiration for the making of the film “The Eagle Huntress”. We also stayed with Aisholpan herself and her father Argalai, and her family, and I have to admit I nearly cried when I met this determined and lovely young woman, who has changed the face of the eagle hunting fraternity, and has since traveled the world receiving awards for her role. (It was the culmination of a long-held ambition of mine.)  She flew her eagle for us from a rocky outcrop near her home, and we had some wonderful photo-sessions.  Asher is also an expert in setting up indoor portraiture, using only natural light, and Aisholpan posed for us indoors as well. She is now 18 and has embarked on a university course. 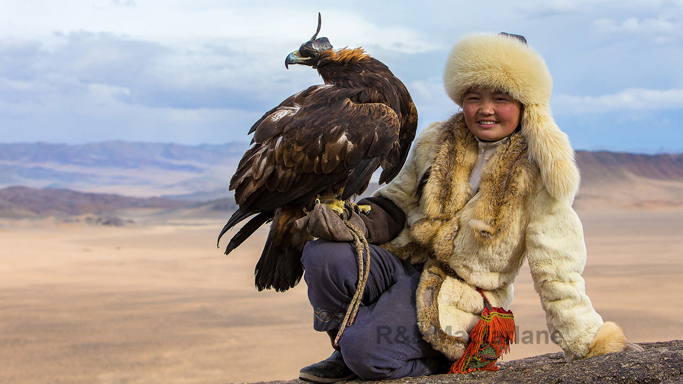 The third family we stayed with was that of Sailo, who was also an expert eagle hunter, and had also bred many successful racehorses for the Naadam Festival, although he is now incapacitated by a bad knee.  Fortunately his son is following in his father’s footsteps and learning the skills of eagle hunting.  It was a wonderful privilege to meet and live with these people, and we are grateful to Asher and Tsoggy for facilitating our visit. It was with regret that we left the families, but the prospect of a hot shower in the hotel in Ulgii was welcome!  There we happened to coincide with Kazakh New Year Festival, and much enjoyed photographing people in their extremely colorful national dress. 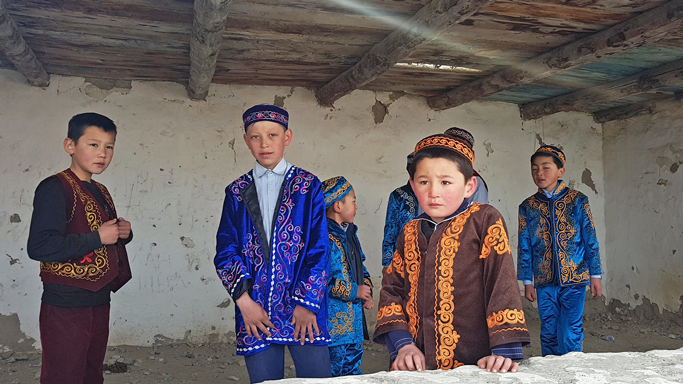 On our return to Ulaanbaatar a final treat had been arranged for us – a visit to a school for contortionists – they start very early at primary school age. The girls performed beautifully for us. It was an exciting and fascinating trip, though tough at times – and although travelling is not invariably straight-forward, Mongolians in general are nothing if not enterprising.  Tsoggy, Asher and the staff of Mongolian Ways were everything we could have asked for, smoothed the way ahead, looked after us very well, and kept us entertained!

In 2008 this unique tradition of capturing, training and hunting was added to the UNESCO World Heritage List. And now it’s your opportunity to join a Kazakh eagle hunter family and hunt with them in the High Altai mountains.

Absolutely stunning! I have never experienced anything like this before.