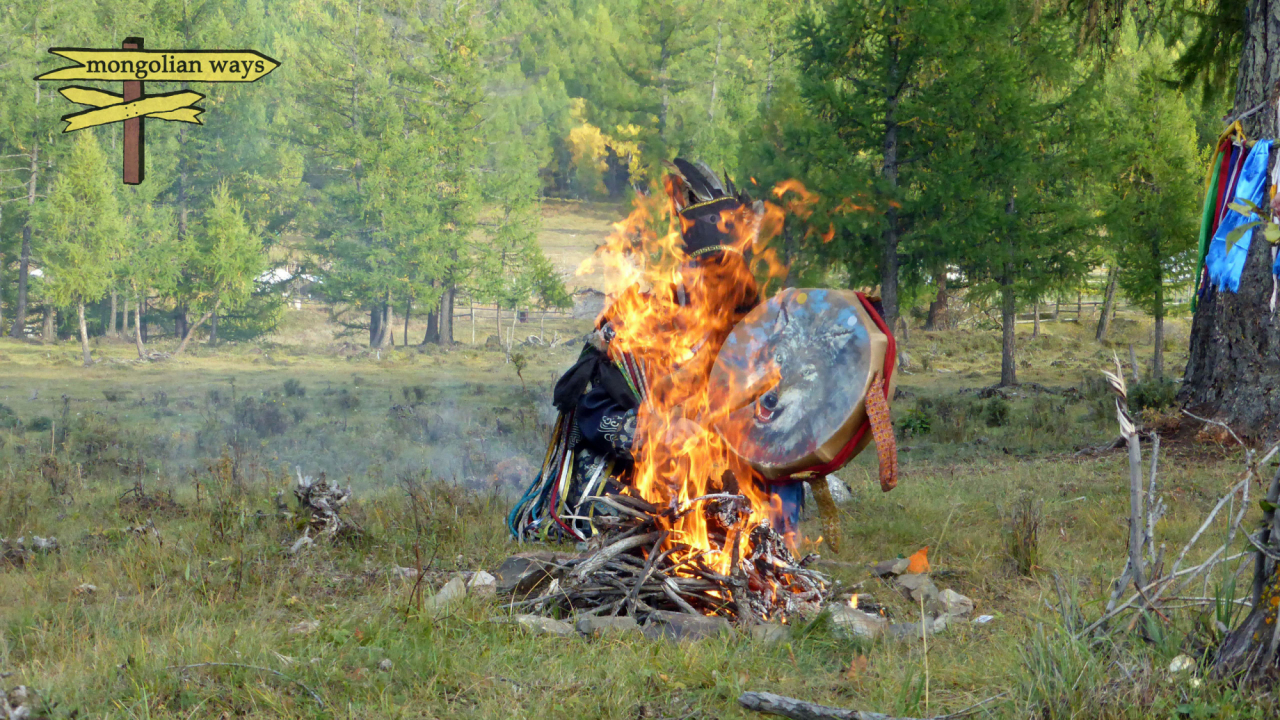 The nomads are dependent on Mother Nature. In her mercy, they prosper, and in her wrath, they suffer. The herder needs rain, but only the right amount of it. Too much rain causes flood, while too little brings drought. He also needs the sun and the wind, but again in the right amount.

To maintain this balance, the nomads pay close attention to nature's cycle, and when disaster strikes, they turn to those who communicate with spirits to seek mercy. A person who can interact with a spirit world is known as a shaman. Shamans convey messages to the spirits, who then help restore the balance in exchange for an offering.

Shamanism is arguably the most ancient form of religion known to humankind. It originated from human's desire to be in the good graces of nature. Thus, shamanism is not based on faith in a particular god but instead based on animism. Animism teaches that objects, places, and creatures all possess a distinct spirit with human characteristics. So, since everything, including the wind, the sun, rivers, and mountains, have a soul, we can ask those souls to show us mercy when in trouble.

Mongolian shamanism is often referred to as Tengrism. "Tenger" (Тэнгэр) is a supreme divine being. Thus, the word "Tenger" describes both the sky where birds fly and heaven where divine entities reside. Unlike most faiths, Tengerism doesn't ask people to follow ten commandments or other specific sets of rules. Humans can keep their world in balance by simply living a respectful life. They can choose to pray only when the need arises (illness, disaster, financial trouble). The characteristics of the heavenly beings are human-like. Like the relationship between Olympian gods and humans, the spirits of the Tenger can get offended by humans and seek revenge. Tengerism emphasizes environmental value above all. It probably arose from the nomad's need to conserve nature on which they depend. It is believed that water spirits will punish those who pollute water – the lus (лус). It goes the same for fire, mountains, forests, and ground. Each of these has a living soul that guards them and punishes those who harmed them.

The eastern religions are far more tolerant towards other faiths entering their cultural space than Western religions. They absorb elements from different religions and lend their values to new beliefs. Thus, in shamanism, you can find principles, mythical figures, symbols, and rituals from Buddhism, Hinduism, and Chinese folk religion and vice versa. This cultural mixture confuses Western travelers when they see Mongolians visiting a Buddhist monk in the morning and attending a shaman session in the evening to solve the same problem.

Mongolian shamanism has a detailed map of the universe. Above us is the sky, the Heavenly Father, presenting 99 tengri or sky spirits. Fifty-five of them, dwelling in the West, are benevolent white-spirits. In the east reside 44 black spirits associated with warfare. They are believed to be stronger than those in the West. The 99 tengri are called upon only by leaders and great shamans within the clans. They are responsible for controlling nature elements: wind, fire, earth, and water. Below us is Mother-Earth, ruled by 77 natigai or "earth-mothers," each responsible for specific tasks. Between Heavenly Father and Mother Earth lies the Kingdom of the Sun. It is where humans, animals, insects, and plants live. Everything there has a soul. Also, each clan had ancestral spirits to whom any member of the family could appeal for help.

Only a shaman can communicate with these spirits during a ritual to help the individual in need. Thus, shamans played a central role in the nomadic community as a medium between our world and the spiritual realm. People come to them with all sorts of questions. They may ask what to do with an unruly child, when to take a loan, or if they will be able to get a visa. Indeed, the climax of the shamanistic ritual is where the shaman communicates with the spirits. Since the shamans also need to make a living like the rest of us, they charge for costly ceremonies. However, they put people who don't have money but genuinely need help on the waiting list. When someone who can pay for the session asks for help, the shaman invites those on the waiting list to participate in the ceremony.

Before the ceremony, the shaman sits down with each participant to ask their birth year (according to the lunar calendar) and about their ancestor's birthplace (including details like a nearby mountain, river, and large lake). Then he writes down the participant's question/request (is my daughter dating a good man? Should I send my son to study abroad?). At the end of the meeting, the shaman puts on the ritual costume and starts beating the drum to different rhythms while singing in ancient Mongolian. The constant singing and drum beating along with dancing and jumping put the shaman into a trance. Then the shaman calls upon the heavenly spirits and, if necessary, the participants' ancestors to seek guidance.

A ceremony usually lasts several hours. While undertaking personal requests of everyone present at the ceremony, the shaman seizes the opportunity to urge people to respect nature and help others. Towards the end of the ceremony, still in a trance, he calls each participant so that they can ask questions directly from the spirits. Sometimes, the spirit asks from the person his ancestral land. Those who don't know give the address of their current home. However, what the spirit asked was the mountain where their ancestors dwelled. Having witnessed several shamanic ceremonies, I heard the spirit saying mocking comments to the person, such as "How long are you going to stay with your drunk husband? Until he kills you?."

At the end of the ceremony, the shaman brings forward all those present and whips them to eliminate any evil from them. As for those who mentioned health complications, the shaman lashes out the disease's source from the body. After the shaman wakes from the trance, he sits down with each person to relay the messages sent from heaven. He sometimes asks the person to perform a specific ritual after the ceremony. I saw a shaman sending a man to the mountain where his family lived for a few generations before moving to the city to throw away a cursed antique. One time, the shaman asked the man to travel hundreds of miles to return a beautiful stone he had taken from a lake as a souvenir.

The animistic beliefs around the world hadn't changed much since ancient times. Interestingly, there are many similarities between the shamanic ceremonies of Mongols and Native Americans. You can see them in the use of the drum, the shaman costumes, the method of entering trance, the use of various ritual objects, the dancing, and the ecstatic jumps. It may be evidence of the oldest link between Native Americans and Mongols.