Inscribed on The Representative List of Intangible Cultural Heritage of Humanity of UNESCO, Naadam is a traditional holiday of Mongolia. The official state Naadam is held from July 11 to13 in Ulaanbaatar. But don’t worry! Those are not the only days Mongolians celebrate their famed festival. Many of the 21 provinces and its 333 sum(s), small administrative unit(s), of Mongolia celebrate the festival on earlier or later dates in July depending on local anniversaries and pasture or herd conditions. As the event happens during the peak of flourishing summer, it is without a doubt the best time of the year not only for the locals but also for tourists wanting to travel to Mongolia to gather and cheer on the strongest wrestlers, the fastest horses and the sharpest archers. 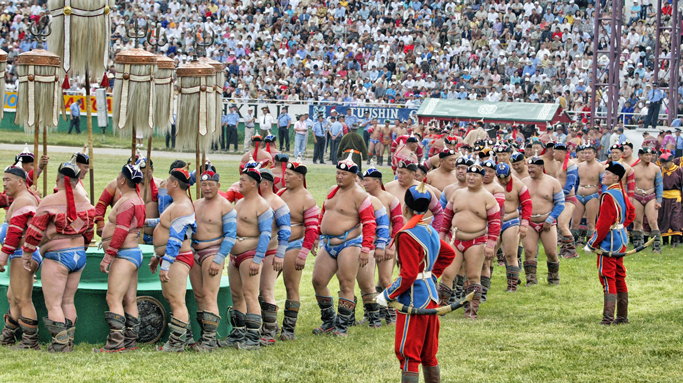 Naadam is locally termed “Three Games of Men” and comprises wrestling, horse racing, and archery competitions. The festival’s origin dates back to about 2000 years, when it was a form of practice for war. Public competitions were exercised as organized events before and after major battles to select leaders for troops that were divided up based on the decimal system. The ones showing strength, speed and flexibility in wrestling, good eyesight and hand-orientation in spear-throw and archery, patience and bravery in horse training and horse racing during the competitions were chosen. The present name, Naadam, was adopted in the 13th century according to the Secret History of the Mongols. It was stated Mongolians celebrated it in the rainfall (July) season.

Once a challenging competition now developed into a national holiday to treasure national independence, history, and cultural heritage with dignity. The locals dress in their most colorful traditional costumes and take part in the opening ceremony featuring art performances, long and short songs, folk dance, and colorful parade of horsemen. During Naadam the national stadium grounds, deserted for the better part of the year, turn into a lively ger city, where food, toys, traditional items and other things are sold. Following the unwritten law, the locals enjoy traditional cuisine khuushuur, deep fried dumpling, and sample airag, fermented horse milk. Both in Ulaanbaatar and in the countryside, Naadam starts with a ceremony honorary guards transfer the symbolic “Nine Banners of the Great Mongol Empire” from the Government House to the Naadam stadium. After the president or that of the administrative unit gives a speech, the games begin. It has a grand scale in Ulaanbaatar as the country’s top wrestlers, horse trainers and archers gather from all corners of Mongolia to compete at the national level over the most prestigious titles and prizes. While in the countryside, herders ride and drive into towns with another very important reason other than just celebrating the festival. That is to meet friends, and relatives who they haven’t met in a while. Countryside Naadam is always a colorful spectacle to experience close interactions with joyous nomads. 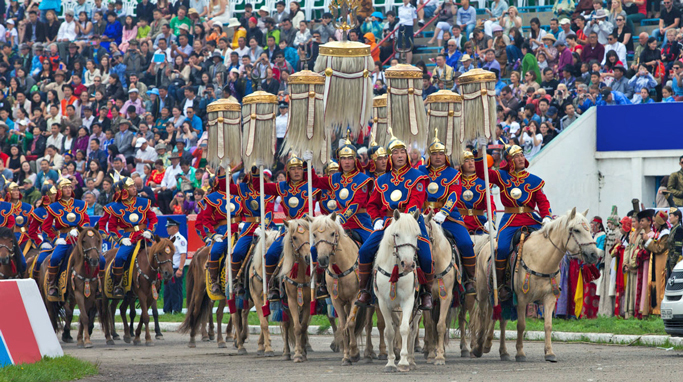 Here is brief information about each of the Three games of Man:

Mongolian wrestling, known as Bokh, is ancient Mongolian martial arts. Bokh means robust in Mongolian and it has unique rules that make it distinctive from all the other wrestling types around the world. There is no space, time or weight limit. A man as big as a bear can wrestle with a younger and smaller boy. It might look the boy has no chance, but that is not the way it is sometimes. The leaner and muscular guys are better off in sharp, short, artful wrestling, while the thicker ones with seemingly soft muscles are good at endurance. At the State Naadam, the number of wrestlers can increase up to 1024. The higher-ranking wrestlers choose from lower ranking wrestlers as their competitors. The winners remain for the next round while the loser end up leaving the competition. After the fifth round and further, the remaining winning wrestlers win titles. The titles are named after birds of prey and strong animals such as falcon, elephant, hawk, garuda, lion, and champion. The competition will continue in this manner until the last 9th round, where only two wrestlers left, and the winner becomes the champion. 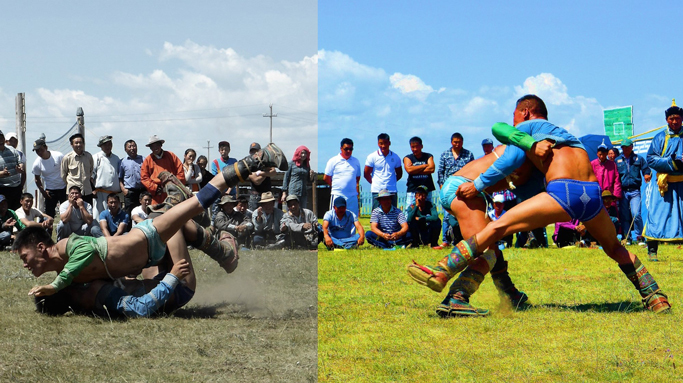 Becoming a wrestler in Mongolia is nearly every Mongolian boy’s dream while growing up. They spend much of their time wrestling with their brothers and friends and it’s encouraged by their parents as it teaches patience, discipline, and respect.  As a result, Mongolia is now one of the top wrestling countries in the world. 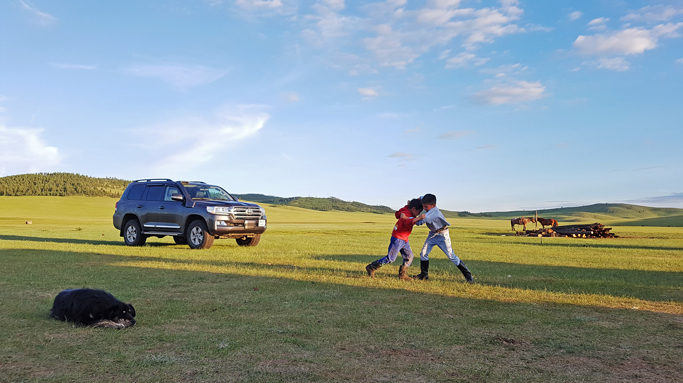 The Mongolian horse race differs completely from their counterpart, European horse race, as it concentrates on challenging the endurance rather than only testing the horse’s speed.  Both horses and jockeys competing in the races are trained for two months before the festival. The jockeys learn to ride horse when they are 3 to 5 years old and start racing from 6 to 12. The horses are left out to graze on the best pastureland but must follow a strict routine to stay in racing shape. The main method is to eliminate excess food and increase blood circulation and muscular activity. It starts with tethering the horse for two days and covering the horse with a felt blanket and going up-slope on the third day. Then, ten days before the competition, the horse must gallop a distance of 10 to 20 km. Four or five days before the race, the distance increases from 20 to 30 km. This is to develop the horse’s breathing pattern and to determine the results of the training. In the race, horses are divided into six age groups and the distance of the race ranges from 15 to 30 km depending on the horse age. For example, the two-year-old horses or the first timers race a distance of 15 km while the fully grown horses race 30 km. There is no special track for the race, so competitors face the challenge of jumping over natural barriers in the steppes. The jockeys are lightweight and excellent riders, which improves horses’ endurance to finish the race strong. The jockeys usually prefer to race without saddles to be as light and fast as possible. In the race, horses and their jockeys coming in the first five places get rewarded and revered. However, the horse that finishes last in the Daaga race (two-year-old horse race) is called Bayan Khodood (full stomach) and given a special reward for encouragement for next year’s festival.  Like the wrestling competition, the winning horses and its trainers are given titles of Leader of Ten thousand, Leading Trainer and Famed Trainer. 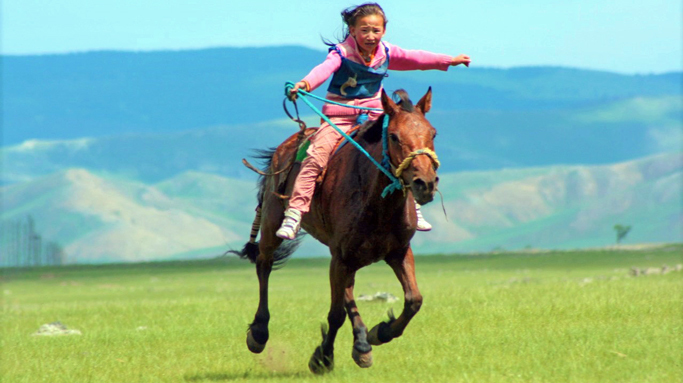 Horse culture has been a major part of Mongolians for centuries and life in the steppe would not be possible without these amazing creatures. The love for their horses is hard to miss during Naadam festival. Apart from clean haircut and careful broom, it‘s common for herders to decorate their saddles and bridles with silver and even gold sometimes. which shows their status in society. The value of a good racing horse has always been notably high and nowadays there are people willing to pay a price of brand new luxury SUV for a recognized one or its descendants. 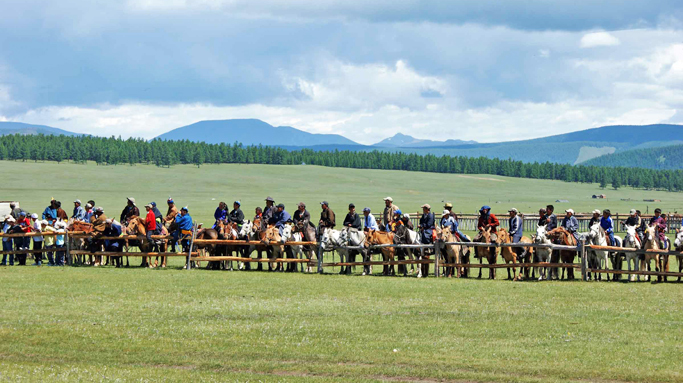 The tribesmen of Mongolia became extremely adept at archery on horseback as it was a necessary skill in the nomadic lifestyle. Lightly armored, but highly mobile archers were excellently suited to warfare in the Central Asian steppes, and they formed a large part of armies that repeatedly conquered parts of Eurasia. Shorter bows are more suited to use on horseback, and the composite bow enabled mounted archers to use powerful weapons. The powerful states like the Chinese Han Dynasty referred to their Mongolian neighbor, as “Those Who Draw the Bow”. Ancient and modern Mongol bows are both part of the Asian composite bow tradition. A composite bow may be much more complicated to craft and smaller than European long bow, but it is far more efficient than their European counterparts. In the Chinggis Khan‘s stele built in 1226 and discovered in 1818 in Kharkhiraa river basin, it was engraved “While Chinggis Khan was holding an assembly of Mongolian dignitaries after his conquest of Sartaul (East Turkestan), Esungge (the son of Chingis Khan’s brother Khasar) shot a target at 335 alds” (536m). 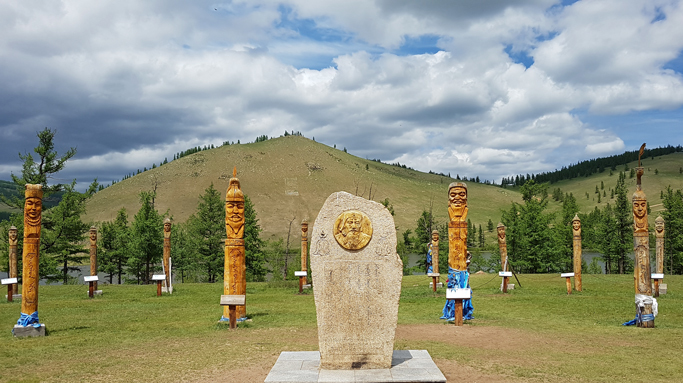 Chinggis Khan stele at The Blue Lake of the Black Heart

During the Naadam Festival, both male and female compete while males shoot from a distance of 75m, and woman shoot from 60m. The target is a wall made of cork cylinders braided together with leader straps, known as hasaa.  In one stand, four archers stand together facing towards the same target. While archers are standing to shoot, they must complete the stand, and nothing should stop them. Only a dangerously strong storm can be an excuse not to shoot. Regular rain is not a reason to delay the competition. From the spectator’s eyes, the width of the hasaa rows and the number of targets seem big and seem easy to hit. But it is not as easy as it looks since not all the hits are considered a score. The score is given only if hasaa moves at least eight centimeters from its original location. Archery is not the only way to challenge one’s visual prowess. In recent years, knuckle bone shooting became the fourth main sport of the Naadam festival. 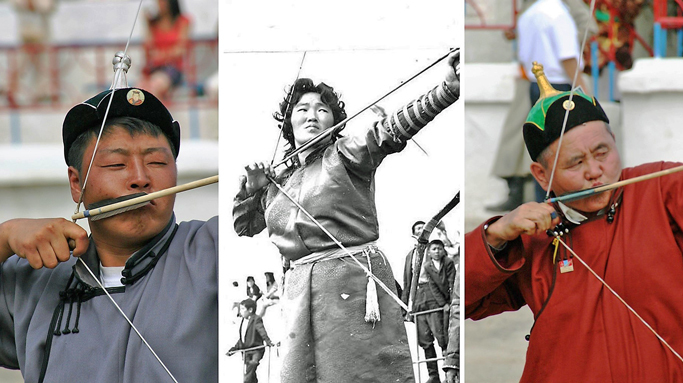 Naadam festival ends after three days of exciting events, leaving the winners enjoying their recently earned titles and the others saying “The next year‘s Naadam is too far”. Mongolians say “Autumn arrives the day after Naadam’  and accordingly people start to prepare for hay and harvest season.

Once a year Ulaanbaatar, the Mongolian capital city, is putting everything on hold as the country's top wrestlers, horse trainers and archers, are gathering from all corners of Mongolia to compete over the most prestigious titles for the Nadaam Festival.