Shamanism is a practice that involves a practitioner reaching altered states of consciousness to interact with the world of spirits.  The term "shamanism" was first applied by Western anthropologists as outside observers of the ancient religion of the Turks and Mongols, and those of the neighboring Tungstic- and Samoyedic-speaking people. Fundamental belief of shamanism is that the universe is alive: all living beings have a conscious soul animating them – humans, animals, birds, insects, reptiles, plants, etc. A shaman is someone who has access to the world of spirits, enters into a trance state during a ritual, practices divination and healing with the help of spirits. 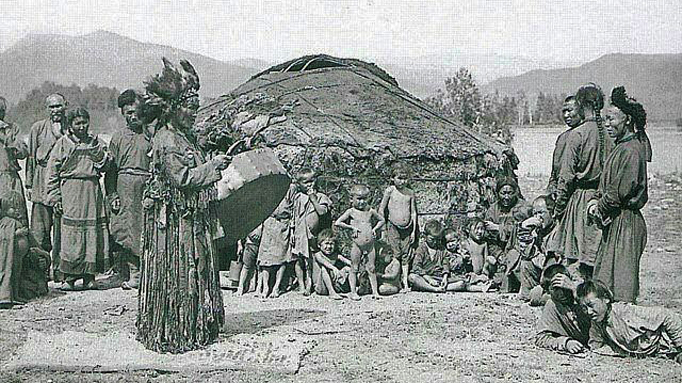 From archeological discoveries of the Neolithic period and from the Secret History of the Mongols, we know there was a system of beliefs in Mongolia whose essential qualities included ecstasy and the ability to combat harmful forces and to look into the future to foreshadow, through the help of ancestral spirits. During the time of Genghis Khan in the 13th century, shamanism was the main religious system in Mongolia's vast steppe. Before each battle, shamans were invited to call the grace for the warriors and prophesy its development. There are many Mongolian and non-Mongolian accounts mentioning weather-magic rituals performed by shamans against the enemy’s army, bringing storms and lightning as metaphorical weapons in war. The Secret history of the Mongols mentions a case of Genghis Khan's court shaman who was politically so powerful that he had to be eliminated. The Mongols knew Buddhism at that time, and Marco Polo reported that monks were competing with court shamans, but the influence of this religion coming from Tibet was not very deep amongst neither the khans nor the public. 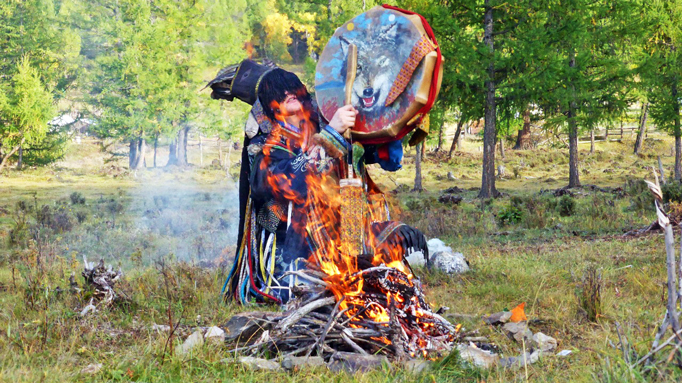 It is only from the 16th century that Buddhism, adopted by Altan Khan, descend from Genghis Khan, started its official spread. Slow but progressive conversion of the Mongols to the new religion has been possible by editing laws against ancient religious practices and adapting Buddhist precepts to an existing system of beliefs. It has been a smart strategy adopted by Buddhism, which consisted in infiltrating leader’s stratum to make apply favorable laws to its expansion and then to settle down deeper by mixing with the present existing Shamanistic roots. The first law was the prohibition of any flesh and blood offerings. Then, ongod, small figurines, which are spirit supports or vessels, and were worshipped as domestic gods, protecting flocks and people, were piled up and set to fire. Shamanic items were swapped with the images of Buddha while traditional prayers were replaced by Buddhist mantras. Buddhist monks took over the ritualistic sphere and progressively became the official religion to the detriment of Shamanism. 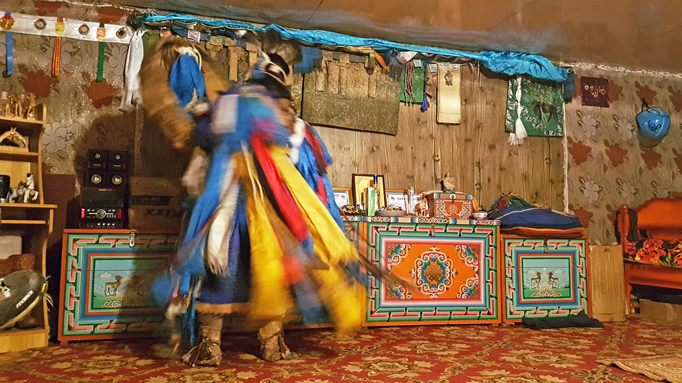 In 1911, Mongolia announced independence after a 220-year repression of the Qing dynasty and turned into a monarchy under the Eight Bogd Javzandamba Khutagt, a Tibetan monk who was seen as a Living-Buddha. But not for long! In 1924, the Mongolian Revolutionaries turned Mongolia into a communist country. Soviets ordered a persecution of Buddhism which resulted in death of over 20 thousand monks. Shamanism rather in the shadow of Buddhism, only surviving in northern Mongolia, were not spared. Shamanic items, costumes and drums were also destroyed or seized and put into museums. All religious activity was under control, and a great number of shamans were put in jail. For sixty years’ shamanism was forbidden, only existing in some hidden remote places. 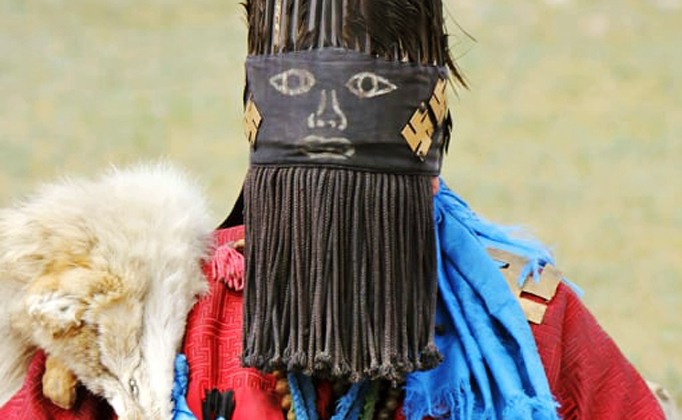 With the democratic transition in 1990, Mongolia suffered tremendous economic and social changes, bringing about crises in every structure of the society. This transitional growth crisis is also the scene for religious revival and new freedom of thought and speech. The idea of being Mongol grew strong in the country and adding to economic and social struggles, claiming about cultural identity also came out openly. The feeling of having a specific culture and above all to be different (from the Russians and the Chinese) has a weight in the process of rebuilding a national identity by reviving authentic Mongolian values. Public donated in the mid-90’s, to defend and promote Mongolian culture, searching for roots, the pure Mongolian culture from Genghis Khan’s time. The society promoted the idea that the true religion of Mongolia is shamanism. With Democracy, shamanism came out openly from the shadow where it has to hide. Progressively, shamans tried to regain a place in the culture and as an old system of beliefs practically forgotten by most of the Mongols. Shamanism was slowly reconstructed from snatches of memories, or from ethnographic books. 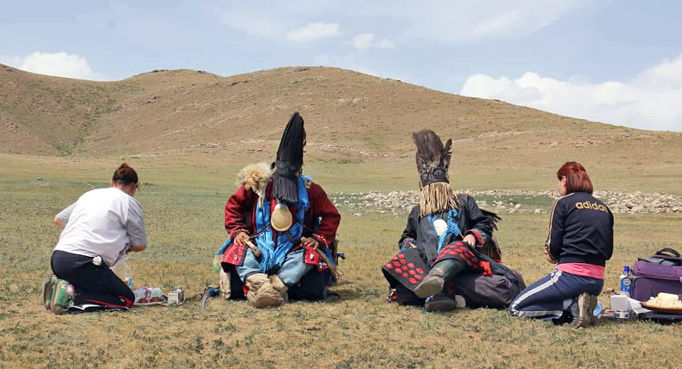 Since the 90s, young and old shamans reappeared again, awakened by their ancestral spirits who were waiting for better times. Shamanism in Mongolia is hereditary. Child or relative and nephew or niece of a shaman will become a shaman. Called and chosen by ancestors to represent their intermediary with the human world and to be properly propitiated, the potential shaman will be trained by an older one once he is proven to be the one elected by the spirits. Legacy of the shamanic essence in shamanic lineage was cut off for many years. No-one wanted to take on such a function, as the communist regime prohibited it. Thus, in the 90s, came out a lot of shamans, young and old, women and men to demand their cultural familial legacy. A Shamanic Center was established in 1996 by a 74-year-old tenth generation shaman. And today, there are over 20000 registered shamans and 10 institutions of Shamanism in Mongolia.

General idea of Mongolian Shamanism is the worship of Eternal Heaven or God of Sky and Mother Earth. There are 99 heavens while the earth is considered to have 88 levels. The third world, the one between the sky and the earth, is the world of the sun, inhabited by living creatures, human beings and animals without distinction. Heaven beings, Masters of land and water, and ancestors, spiritual entities of the three worlds, compose the invisible sphere that invokes the shaman. With it, he has to negotiate and handle in order to resolve problems of his community and of individuals, and to lure to obtain prosperity and protection. Familial network of harmony is important in Mongolia, and who else than ancestors could negotiate with spiritual and natural world on behalf of their descendants? 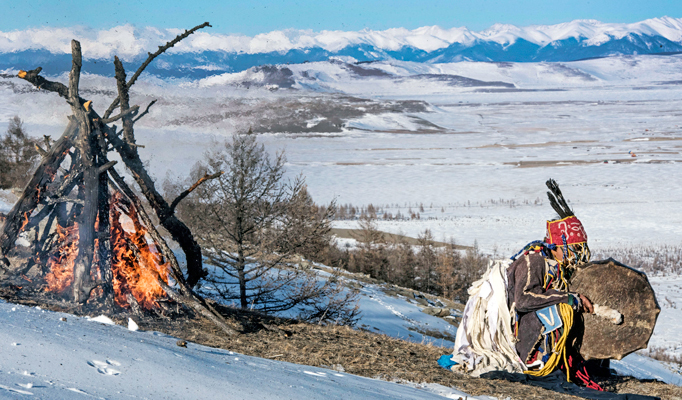 A great number of demons, spirits, ghosts wander also here and there without any special localization and cause troubles to the living. Lus and Savdag, respectively the Masters of water and land, entities representing natural forces and living in natural elements, can be dangerous for human being, unless they are properly worshipped and respected. Lus are snakes or dragons and are associated to the aquatic and under world. Savdag are the lords of the soil, land, mountains and rocks. Lus-savdag incline to take revenge on the human beings who do not respect them". Rules of respect are of an ecological kind: not to pollute water, not to break the branches of a tree, not to dig the soil… Otherwise misfortune happens. They cause drought, flooding, epidemics, illness, deaths and attack man as well as his livestock. Lus-savdag are to be pacified, given offerings to make them kind and protectors. It is also for them that Mongols turn around the ovoo, a pile of stones and branches found on mountain tops, riversides and roads. Ovoos are believed to be their home, as well as shaman trees (with weird shapes). The shamanic system works like a communication system with the shaman tree and ovoo, acting as aerials where spirits are picked up, so the shaman can be in contact with his entities wherever he is. 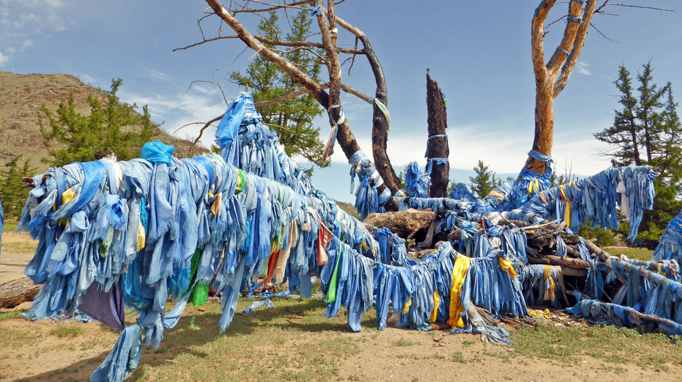 A main emic distinction among Mongolian shamans is indicated with color designations. Shamans who call upon spirits from the east are ‘black shaman, shaman of the black creed’. It is believed that war spirits mostly reside in the east, thus, black shamans are capable of doing harder rituals. Shamans who call upon spirits from the west are ‘white shaman, shaman of white creed’ who are best known for their healing abilities. There is also a term known as ‘yellow shamans’, those who absorbed numerous Buddhist elements. 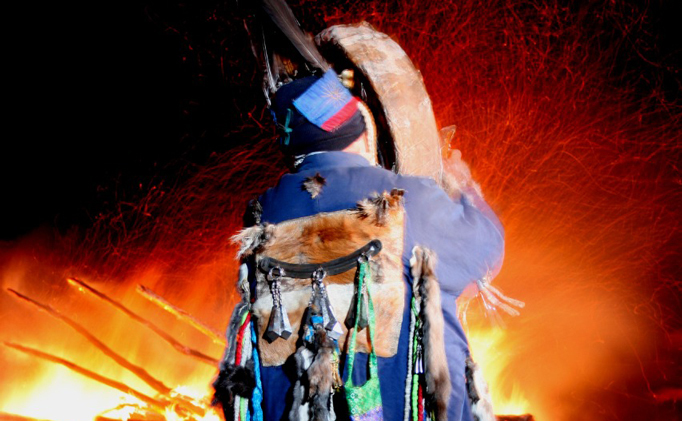 An important attribute for Mongolian shamans is shared with all other shamanism of Inner Asia: the drum. The drum helps the shaman to enter a trance state by its hypnotic rhythms, associated with songs and dance moves. The drum's skin was often made of deerskin, the drum itself standing for "the saddle animal on which the shaman rides or the mount that carries the invoked spirit to the shaman." Other ritual costume elements include Mongolian deel (armor), swords, shaman hat (with veil covering the eyes), mirror armor, etc.

During a ritual, a shaman would beat the drum in a monotonous rhythm and sing long songs to call the spirits. Invited by the songs, the helping spirits and ancestors would gather around the shaman. The shaman would dance, and would soon be exhausted by the weight of the heavy costume and drum. Tiredness helps to enter and deepen the trance state. When the shaman is fully in trance and has his/her spirit helpers available, the real work could begin. The shaman would seek out the spirits that caused illness and problems, and through communication with them a shaman would try to find healing or solutions.

Private tours are our specialty! Over 80 percent of our customers have traveled on private adventure tours, either creating their own tour around specific interests and booking it as a private tour, along with some personal touches.